How To Prevent and Get Rid of Biscuit Beetles 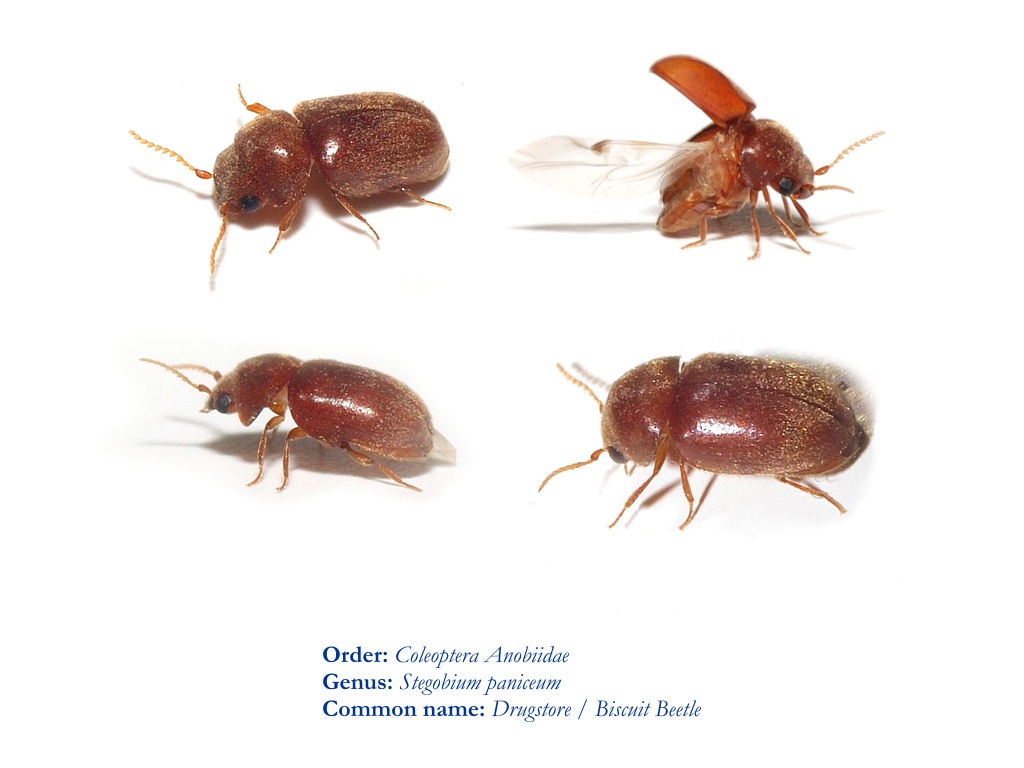 Most people don’t think to check their dried food for pests as it’s not somewhere you’d necessarily expect to find an infestation. Your store-cupboards can, however, become somewhere for pests such as biscuit beetles (or drugstore beetles) to thrive, which can cause contamination and health risks, as well as being a huge inconvenience. In this guide, we’ll look at everything you need to know about biscuit beetles and take you through some common questions about infestations.

What are biscuit beetles?

Biscuit beetles are small, hard-shelled, reddish-brown beetles with an oval-shaped body which is humped and covered in short yellowish hairs. Their larvae are white, crescent-shaped and grub-like. Biscuit beetles are closely related to, and often mistaken for, the Common Furniture Beetle (woodworm) due to their physical similarities. It is therefore advised to get an expert in to make sure the pest is correctly identified.

These tiny beetles aren’t fussy eaters and will feed rapidly on pretty much anything, but are mainly attracted to areas where dried food is stored. They target goods such as flour, pasta, grains, and – you guessed it – biscuits. Owing to their eating habits, common alternative names for biscuit beetles are bread beetles or drugstore beetles (in America), though their scientific name is stegobium paniceum.

The pests favour temperate climates and are usually thrive in dark, warm, undisturbed places around their food source – for example, in the back of your cupboard on some old, rarely-used food that you’ve forgotten about.

What is the life cycle of a biscuit beetle?

The female will lay her eggs – pearly white and almost impossible to spot with the naked eye – in a food source. Once the eggs have hatched, they are in the larvae stage for around 4-5 months. During this time, they feed from the food source and may spread, moving from one product to another – they can easily penetrate through packaging a lot of the time.

The larvae then enter the pupa stage for about 12-18 days before forming into an adult. This part of the life cycle is relatively short. Adult biscuit beetles do not eat, instead wandering for around 3-4 weeks, during which time they will lay more eggs. Biscuit beetles will often lay their eggs on another food source but equally may wander quite a distance from the original site. They can be found in other areas of the room such as work surfaces or window frames, as they are attracted to light. Providing that conditions are favourable, biscuit beetles will have around 4 broods per year.

How to get rid of biscuit beetles

If you notice these little brown beetles in your house, you should take action as quickly as possible. The treatment process is very similar to that of other stored-food pests. The affected area should be thoroughly hoovered, taking care to go over all cracks, corners and crevices, and the hoover’s contents should then be sealed and binned. Make sure to remove and dispose of any contaminated food sources.

You should then call in the help of a professional who can properly fumigate and treat the infested area, as DIY pest control is often ineffective. An official pest control company will have the appropriate means of getting rid of an infestation, completely clearing the area and making sure there are no signs of pests left over. An appropriate insecticide may be used, and the infested areas treated to eliminate any migrating pests. They can also advise you of preventative measures to ensure the same thing doesn’t happen again.

How to prevent biscuit beetles

Seeing as though the food source is the main attraction for biscuit beetles, one way of preventing them is to keep less bulk food products in the home. This, of course, is easier said than done, but you can try and cut down by only buying what you need and keeping track of food so it doesn’t get left open and forgotten about. The food you do have should be kept in tightly sealed containers, or at least make sure the opening is closed with a food storage clip – this will also stop it from going stale!

You should also try and store your food in a cool, dry area to ensure you are not creating an ideal environment for pests. This means making sure that it is not stored near any heaters and trying to keep your kitchen at an agreeable temperature.

Lastly, make sure your food storage areas are always kept clean and tidy, clearing away any spilt food. This includes hard-to-reach areas such as drawers around the stove, behind the fridge, and little nooks and crannies where you wouldn’t usually think to clean, as well as shelves and cupboards.

No, biscuit beetles are not harmful to health, though they may contaminate food sources and storage areas with faeces or eggs, so it is recommended to have a thorough deep clean of infested areas and dispose of any contaminated food.

There isn’t necessarily a specific cause, they are just found where there is a food source that has attracted them.

They are fond of warmer regions and are often found in warm/heated areas such as shops or food cupboards. They are attracted to several different food sources from pet food to leather, but most commonly dry stored food such as grains.

Yes, adult biscuit beetles can fly, although they do not feed, and have a relatively short life span of a few weeks.

No, biscuit beetles don’t bite humans – but they will gobble up your food!

No, biscuit beetles aren’t known to carry any diseases.

Here at Pest Defence, we offer reputable pest control and prevention services throughout Essex and London, including biscuit beetle control. Our fully trained team of experts can carry out the removal of virtually any infestation. For more information on our various services, don’t hesitate to contact our friendly team today.